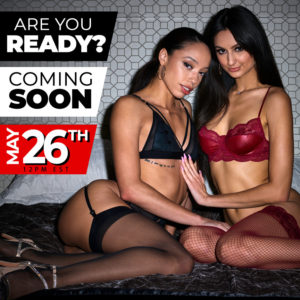 HOLLYWOOD, CA – Over the course of his extraordinary career, award winning performer turned producer and director Ricky Johnson has stuck to a simple but powerful philosophy – some people want it to happen, some wish it would happen, others make it happen. With overwhelming proof in his first year alone, he clearly falls into the last category.

“I felt that after being in the industry for a little bit and my experience producing for Reality Kings that I could start my own website/company,” explained Ricky. “Of course, I’ve had an amazing crew to help with the process. Curious Judas has been my main videographer, James McCloud has been my photographer. Rob has been my PA. Lexi has been my main make-up artist. Janae has been a wonderful personal assistant. I also partnered with YourPaysitePartner and they’ve done an amazing job coding the site among other things. It’s great because I feel like I’m such an independent person, it’s great to have a team of wonderful people help me out.”

“It was amazing working with best newcomer Blake Blossom,” said Ricky. “I totally understand why she won the award! I’m excited to see her grow in this industry. I was blessed to shoot a bunch of the industry’s top leading ladies and newcomers.”

A passion project in the making for over three years, the site caters to POC and hot sex with a sizzling, gonzo, nighttime aesthetic. There are no scripts, just all-star performers having sex and it being captured to the fullest. The goal is simple – to just get genuine sex for the fans to enjoy. Johnson insists on scene partners having strong sexual connections throughout, one of the hallmarks of his work.

“One of the main focuses of the site is chemistry,” said Ricky, “so there is a decent amount of time spent on pre-production. I feel it’s important that the scene partners actually want to work with each other rather than be set up in a blind date type of situation.”

“I also wanted to make a site that will allow talent to be comfortable and place where new male and female talent can get a chance to showcase their talents,” Ricky explained. “Mazee the Goat is one of the other male talents who are on the sight aside from me and he far ahead one of the best new talents out there. I’m excited to see his career take off and flourish. Air Thugger, Dwayne Foxxx, and Jax Slayher are some other male talents who make guest appearances to Ricky’s Room.”

Other members also recommends:  “Sick Of Your Mess”

Given his past track record and the star-laden scene menu, his success seems almost guaranteed. Johnson acknowledged his enthusiasm for the future as he talked about plans for the first year.

Visit https://rickysroom.com/ to get in on all the blistering hot fun!

Ricky Johnson is represented by OC Modeling. To book him, visit his model page at https://ocmodeling.com/model/ricky-johnson/.

California native Ricky Johnson went straight from college to adult entertainment. He got his start by sending photos to OC Modeling, who immediately signed him in 2017. That same year Ricky pulled his first hat trick, winning Best Newcomer award from AVN, XRCO, and Urban X Awards.

Award winning performer/producer/director Ricky Johnson puts his talents on display at Ricky’s Room. Packed with the biggest names in the adult entertainment industry, the new site is stuffed with sexy all-stars and caters to POC and hot sex with a sizzling, gonzo, nighttime aesthetic. There are no scripts, just top-notch performers having mind blowing sex that’s captured to the fullest. The goal is simple – to just get genuine sex for the fans to enjoy. Drop by Ricky’s Room and get off!