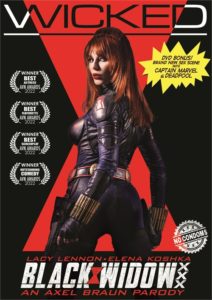 Last year we gave you an overview of this blockbuster when it first came out. While it was not in DVD form and only available at the time via VOD, it was still a very powerful, excellent and entertaining parody from Axel Braun. With his penchant for comic book super heroes and a long track record of successful super hero parodies, this one was a no brainer. The very first award the is film got came from us at NightMoves with our First Choice award. That award is for films we feel will be major hits but were released after our cut off date for award nominations. Since that time the film has gone on to win several more awards from both AVN, XBIZ and just last night a couple of awards from the XRCO awards.

Like every production that Axel Braun does this one is no different when it comes to detail, special effect, costuming, a great story line, sizzling sexual scenes and most important excellent casting. It is all of these things that sets him apart and brings to an audience the very best in super hero parodies as well as his other forms of adult entertainment. All of the dozens of awards he has won in his long career did not happen by accident and this latest release just adds more to his overall legacy in adult films.

But there is even more fun coming your way in this latest from Braun. Ramon Nomar as the Taskmaster makes a solid showing and we have Captain Marvel (Kenzie Taylor) and Deadpool (Seth Gamble) up to their old tricks sexually once again. The action is fast and furious, the humor continues throughout and the sex is  intense, hard hitting and powerful. The scene in the space ship with Lennon, Koshka and Gamble as Deadpool is hilarious. The finale with Taskmaster added is both funny and intense, but it is the very ending that explodes unlike you expect that is fantastic. Lennon has a great co star in Koshka and these two together make quite a team. However, make no mistake about it, Lacy Lennon as Natasha/Black Widow literally steals the show. Not only does she deliver sexually in sizzling fashion, but also as an actress who can turn on the drama and comedy switch in a second and deliver a captivating, winning performance in her role.

Once again Braun comes through with another all out, detailed parody of another comic book legend. The entire cast was at the top of their game, the special effects  with the space ship and music were perfect, the action sequences were well choreographed and the writing crisp with just the right dose of humor throughout. It is no wonder that this film, since it’s “First Choice” award has gone on to win many more. If you have yet to catch up on the latest super hero parody from Axel Braun, be sure to add this one to the list. It is pure entertainment in every way and a great way to get you ready for Braun’s next release. That will be coming out this summer with another favorite from the comics, so stay tuned.