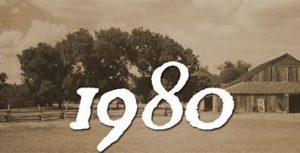 It was the new decade of the 80’s and a lot of excitement accompanied the beginning of the new decade. How much of it do you remember? As always we begin by taking a look back at the cost of living in 1980.

The average yearly income was $19,500, the average cost of new 3 bedroom house was $68,700, the average cost of a new car was $7,200 and a gallon of gas had jumped all the way up to $1.19. A pound of ground beef was $1.39, you could by a Magnavox VHS Recorder for “only” $699. or a VHS Home Movie Camera for “only” $1,599., while a Pontiac Firebird was just under $6,000. Some of the 1980 news headlines……..Former movie actor and Governor of California, Ronald Reagan defeats Jimmy Carter to become President…….The start of a decades long war between Iran and Iraq begins. Look at where it is today…….Japan surpasses the U.S. and becomes the world’s largest auto producing country……The U.S. leads a boycott of the Moscow Olympics in protest of the Soviet invasion of Afghanistan………The Killer Clown, John Wayne Gacy Jr., is sentenced to death for the murder of 33 boys and young men……..Former Beatle John Lennon is shot to death outside his New York City apartment…… Fire destroys the MGM Grand Hotel in Las Vegas……..VHS cameras and recorders are a big hit as the first domestic camcorders and fax machines are available in Japan. There is the release of the Pac-Man arcade game. CNN becomes the first 24 hour news station.

In Hollywood among the big films were Star Wars Episode V: The Empire Strikes Back, Superman II, Raging Bull and Coal Miner’s Daughter. In music the big hits come from Blondie, ABBA, Diana Ross, Black Sabbath and Queen. In the world of TV, The “Who Shot JR” episode of Dallas is watched by millions. Other hit shows that year include Love Boat, The Jeffersons, Little House on the Prairie and Dukes of Hazard. Among the celebrities we lost were ex Beatle John Lennon, director Alfred Hitchock, singer Bob Marley, and actors Steve McQueen and Peter Sellers. 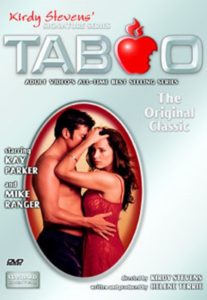 The subject matter is incest. Shocking of course, but it is something that does take place in today’s society worldwide. Stevens took on the subject turning out an extraordinary film that holds your interest from the first frame to the last. It is a study in frustration, taboo sexuality and its end result. The story centers around Barbara Scott (Kay Parker) whose sex life with her husband has no passion, chemistry or love as you discover right in the beginning. He leaves her for his mistress and suddenly the son Paul (Mike Ranger) has to become the man of the house. He quits school to get a job to help out his mom, who it obvious he has feelings for that are more than normal. He has a girlfriend (Dorothy LeMay) who he enjoys sexually and at one point another girl (Tawny Pearl) joins in the action. But it becomes more obvious it is his mom who he wants. He spies on her taking a shower and watching her work over her naked body.

The writing by Helene Terrie was mainstream quality, the production values, lighting and sets were all top line. The cinematography was exceptional giving the viewer angles, fades, close ups and views that hadn’t been seen or explored before. Stevens direction was beautifully etched and paced throughout the entire film.

The immediate popularity of this film, due to its subject matter, and the press it got would spawn a long number of sequels over the years that were not nearly as good. Then again, when you have such a superlative film like this doing sequels that can match the original is almost impossible. Stevens would direct several of the sequels and both Kay Parker and Juliet Anderson would appear in some, but in minor roles. All those that followed basically used the subject matter as the “hook” to grab viewers and buyers attention and just did not measure up either in the writing, subject or performances.