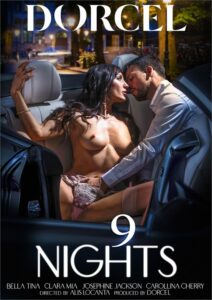 It opens with Bella in the midst of the city seemingly lost when a helpful male, John Stwo, is eager to help her find her way around. The views of the exotic surroundings of the city add to the opening as we find Bella seemingly on her way. Then after a few days pass Bella is jogging with her friend Clara Mia on the roadside when a fancy sports car beeps it’s horn as it passes then stops as the two girls jog up to the car. Who is it but John, the guy Bella had met when she was lost in the city. Unknowing to Bella her life is about to begin a big change. John brings her to this magnificent villa overlooking the road below and the distant city with an incredible view. It is here that he begins to put his moves on her, but she slows him down, for the moment as they kiss and caress. Once they are inside the kissing an d caressing get more involved as Bella begins to feel a connection happening with them. Before she knows it, they are in a full sexual mode as she shows off her varied talents and he gives her more than she was expecting, but this is only the beginning. Bella has no idea how her life is about to be changed over the next nine nights, and maybe forever.

In closing let me say that director Alis Locantro definitely knows how to pace, shade and bring out the very best in her style. The women are incredible and Bella Tina is one MILF I want to see much more of the way she carries this production is breathtaking. The cinematography throughout, not only of the sex with some superlative closeups, but of the surroundings, the city, the backgrounds all add to the aura of this film. The only flaw I found with this one was that the narratives were way too softly spoken and hard to understand. Still, this is a magnificent release. It is designed for couples who love mystery, change, romance and sexual eroticism. Dorcel just continues rise above and beyond with each new production and with the stable of stars he can go to, and the directors he has at his call and the locales he has available, how could he not be among the very best. I absolutely recommend get hold of “9 Nights” from Dorcel.