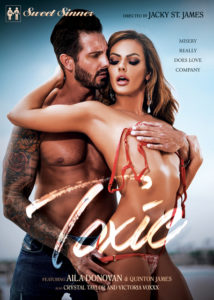 This film is a nominee in the Best Feature Film category for the upcoming 30th Annual NightMoves Adult Awards. The link where you can vote for this film is at the end of the review. So be sure to get your votes in today.

There is an old saying that ‘less is more” and no can do it better than Jacky St. James. She can take a light story, a small cast and turn it into a solid, big time even that has every element of the human psyche attached to it. In this brand new film “Toxic” she has done just that with this pulsating drama. In addition to the powerful sex scenes, it touches every nerve of what some people have gone through, or are going through in real life.

“Toxic” is the story of a loving couple who have a very volatile relationship that seems to only be satisfied by their sexual relationship. But beneath that exterior is an interior that is burning and yearning for escape, but how to do it is the question that keeps them together. When the idea of having a more open relationship comes about, it creates even more problems, but also some pleasures that bring about newly discovered layers in their personalities.

She heads over to her friends, Tom and Leila (Ryan McLane and Victoria Voxxx) for some comfort and understanding. When she arrives Leila isn’t home, so Tom invites her inside. Being the goods friend he comforts her with words of wisdom but before long it becomes a lot more intimate and Hope gives in to the temptation and has an all out encounter with Tom. Knowing that Tom and Leila are in an open relationship she pretty much accepts the fact that this encounter will be okay. It is just what she needs to get her anger at Alec over.

After all this Hope returns home and tells Alec that she had an encounter with someone else. This just sets Alec off big time and things get a little rough between them. It ends up in a very hard, powerful and intense sex scene between the two as they both try to prove their points about each other and their relationship through sexual means. But is it enough, will Hope be ready to enter into an open relationship, will Alec decide that is not what he really wants? You will just have to see this well done feature to find out. I will also add that this was the firsat time I have seen Ms. Donovan perform and I want to see a lot more from her.

Once again Ms. St. James has blended story, location, cast and settings into a well played canvas of emotions and the human psyche. The scenes between Aila and Quinton are very powerful and edge of your seat strong. The camera work by Mike Quasar with some of the black and white images adds to the intensity and make up of the production. I can definitely recommend that you should get hold of this award worthy new release. It is a great couples view with plenty of steamy sex and great entertainment.

It is nominated for Best Feature Film in the upcoming NightMoves Awards and you can vote for this film by going to: https://nightmovesonline.com/vote-now/  so cast your votes today.